It’s again my turn to post the collab… and I’ve broken a promise that I set last time to let you guys know what’s up… Something that Aria has no qualms about reminding me. BUT I WILL MAKE AN EXPLANATION POST! I promise! Anyways, in the meantime, we may be a little behind (partially my fault but mostly Ply’s fault so just blame him) we’re getting around to some progress.

The intelligent and thoughtful Aria

The super awesome and famous Moya

And the struggling yours truly.

The other one opted not to participate because he’s lazy.

What are your general thoughts on this episode?

Much fun, such wow. Yushiro and Tamayo make good additions to the cast, although it seems Gotouge really likes angry bois.

Tamayo’s character certainly adds depth to the whole demon vs. human conflict. She also introduces us to more technical sci-fi aspects of what demons are. Demons in this show seem to converge with vampires in popular western culture – they don’t age, can apparently survive by drinking blood, stay away from sunlight…

Man, are we starting to get into the thick of things now. Tamayo is a great addition to the cast, and she has some pretty big parts to play in the future *spoilers* so I love her. If only she wasn’t piece and parcel with such an angry bean…

I…really hate angry boys. Before trying to fix Nezuko, Tamayo should really be researching ways to suppress those angsty hormones.

That is a medicine that will never be invented…

Did the episode fit your expectations, and in which ways did it differ from it?(If it does)

Basically, yep. Tanjiro even did something about the udon like I guessed.

I was surprised that Tamayo was a good character. Also, Muzan’s obsession with appearing human (in actions as well as physiognomy) was somewhat unexpected.

(in reference to Moya) I mentioned it in the last episode review as well, but Muzan’s seeming obsession with appearing human has always baffled me. Given the sheer power he has, ti seems odd that he’d have any attachment to humans… or that he can even be a father? A lot about that that is strange.

I’m totally surprised that Tanjiro went back for the udon. Good boy.

Tanjiro is a very good boy. He can even fetch lost items.

What do you expect to happen from here on out?(and why)

Well, what else? Tanjiro’s gotta slay some demons – specifically the eye guy and the ball girl (apparently, according to the next episode’s title, they’re “Arrow Demon and Temari Demon” respectively).

Besides slaying them, Tanjiro has to get blood samples…

Well one thing is for sure. We need more Nezuko action.

Also, I really wonder how he’ll preserve the blood for so long, especially once he’s off to somewhere far from Tamayo. Maybe demon blood stays fresh for longer??

Which scene got the most reaction out of you? (If any at all)

Muzan blowing some unfortunate woman’s brains out. One of my favourite manga is Kurosagi Corpse Delivery Service, after all…

I listened to the OST for the first time with this episode and it’s quite cool. Also, I didn’t realise it until now, but Ufotable replicated the type of cheap paper Jump is printed on for the next-ep preview.

The woman getting blown up after experiencing rapid cell division reminded me of Made in Abyss. Poor thing…

Which character did you like the most this episode? Have they done anything in particular/changed?

Tamayo! I’m not a fanatic like Yushiro (who is a total stalker creep), but she’s pretty cool. A healer with the power to go berserk?

Tamayo is awesome. Yushiro aside, she’s pretty, very mature and intelligent, and just an overall sweetheart. Plus… her power is pretty freaking cool when you get to know more about it.

What’s the high point of the episode for you and why?

This is kind of unconventional for me, but…the things we got to learn, both about Muzan and about demons in general are the high point this episode. (Yes, even more so than Nezuko kicking the air and whatnot in the background.)

Muzan being nice to his family while his Obviously Evil red eyes darted around. It was interesting to see “真心” (“sincerity,” or literally “true heart”) written on two banners on the street where he parted with his wife and daughter. A dose of sarcasm, or subtle characterization?

Well, I gotta be “that guy” here, so obviously Nezuko being bored in the background. Too cute. My heart can’t take much more of this.

What can be improved in this episode and why? (a.k.a low point)

Er…is locking a potentially transforming demon in a basement a good solution?

Angry boys need to be…less angry? But seriously, I know a lot of the yelling is done for humour, which I don’t think works in the show’s favour. It kind of kills the humour when you anticipate a character’s (not particularly original) reaction to an insult before it actually happens. If the show is relying on dramatic reactions, I really think the timing of jokes can be improved.

I don’t have much to complain about, honestly. Am I too relaxed about these sorts of things?

Pick a situation from this episode. If you were put in this situation, how would you have handled it?

So, Tanjiro not only showed himself to Muzan, but decided to DECLARE WAR on someone who’s clearly 100x stronger than him. I’d have gathered myself and ran. Blinded by rage or whatever, he sure is a dumb kid.

I have nothing different to say. Tanjiro is an imbecile.

This picture even matches the colour of my text… 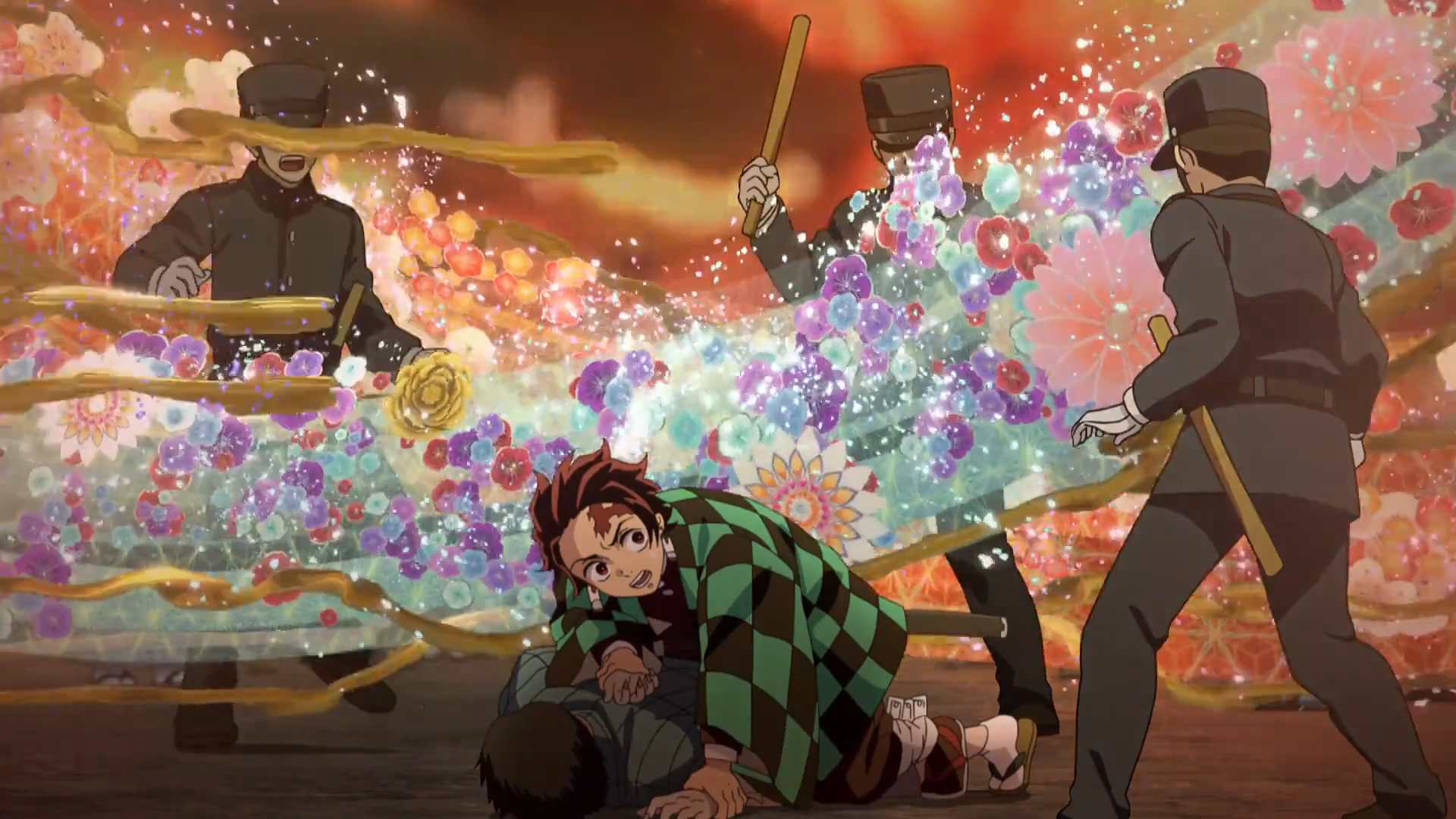 Damn, Aria and I have similar tastes. Clearly, the flower scene was the prettiest. 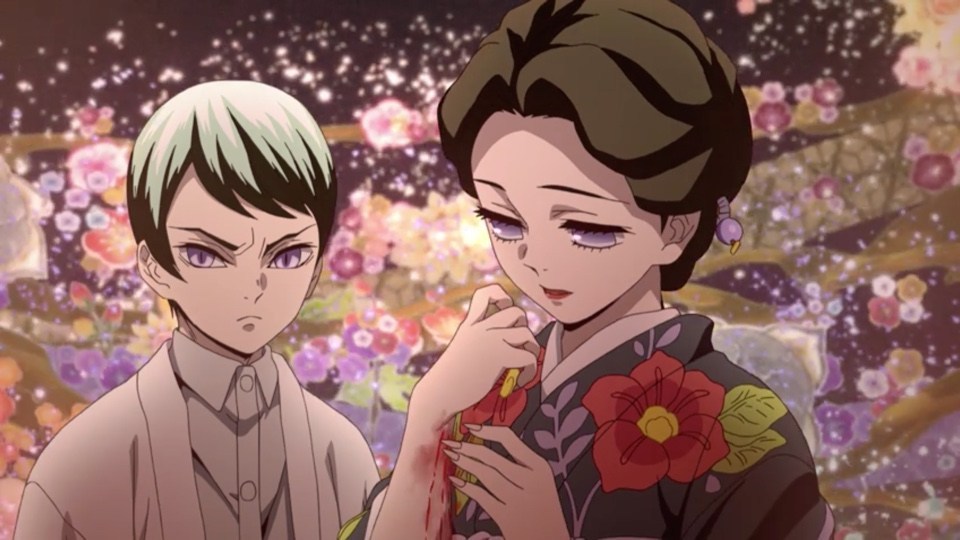 Why stop at 2 when we could have 3? I love the contrast between the colorful, mystical background and Tamayo’s sorrowful face, plus blood.

In 10 words, summarize what you want to say about this episode. (A good joke question?)

hid in a doctor’s house, but…

Muzan has to kill,

And Tamayo has to heal.

Watch out for people (demons) with weird balls…

(being on medical recovery is the perfect excuse for immature humor.)

Nezuko is the source of all happiness