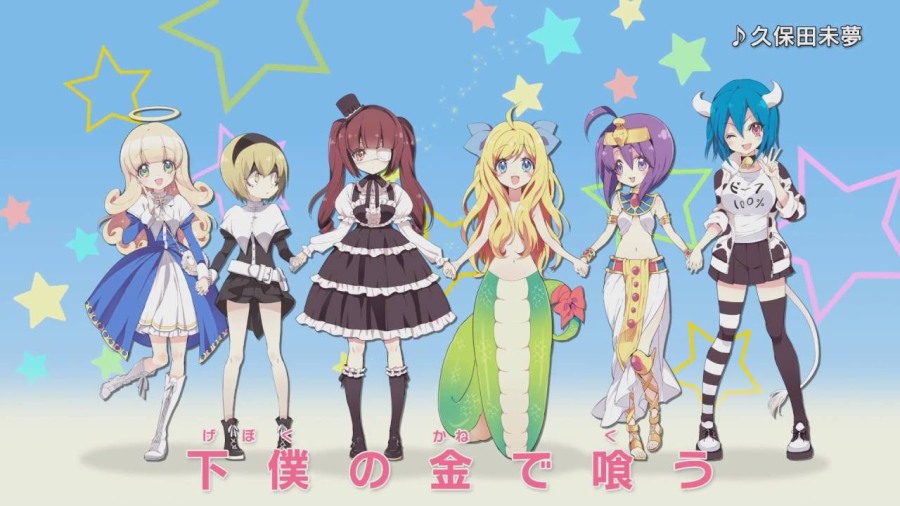 Some seasons, there are shows that surprise you. Shows that come out of nowhere, blowing away all your expectations, and leaving you wondering where such a masterpiece came from. Dropkick on my Devil is not one of those shows. In fact, it’s just about as polar opposite as you can get.

So far this season, i’ve been pleasantly surprised by most of what i’ve seen. However, with this show… Honestly, I think this is the first show this season that I actually really struggled to get through the first episode of. It’s not just bad… it’s painfully bad, for so many reasons. But hey, I guess that at least gives me something to talk about.

The show attempts to be a very meta comedy show, constantly addressing the audience, the characters seeming to know that they’re in a show themselves. Featuring a colorful cats of devils, a witch, and a fallen angel, it’s basically a compilation of short-form shenanigans piled into a single episode.

The writing is bland, immature, and uninteresting. The art ranges from looking good to looking lazy, and the randomness of the show has no real cohesion, or plot, to speak of. The OP and ED are both below average, and the sound design in general is pretty disappointing.

It’s… honestly, just a mess of a show. It’s not fun, it’s not funny, and it’s not interesting. I haven’t finished the season’s catalog yet, but it might just be the worst show on the roster.

I don’t want to rage too much on the show, however, so i’ll leave it there. Anyone else had the misfortune of seeing this show? I really would recommend avoiding it, if possible. If you have seen it though, i’d like to hear your thoughts. Thank you all for reading, and i’ll see you in the next post!

3 thoughts on “Dropkick on my Devil – First Impressions”