After much dilly-dally, including a one-week hiatus, we’ve finally gotten to the finale! Will this collab end with a bang or with a whimper?

Aria: I was going to jump in here, but Astral still has some stuff he’d like to say. Something about Machiavellian theory…?

Astral: Happy, Happy! Well, I had quite a bit I wanted to say, but the show strayed a bit from where I was hoping it would go… though I kinda predicted that it would. What I was going to mention was how the debate between Karls and Furanui on the proper way to handle a kingdom… Kinda matches up a bit with some of the Machiavellianism theory I studied in school.

The basic principle of the theory is debating whether it’s better for a ruler to be loved, or to be feared. It’s an interesting debate, that discusses the use of fear and cruelty in the ruling of a kingdom. Machiavelli states that pure kindness will make a ruler weak, and his kingdom will fall out beneath him. But pure cruelty and a reliance on fear can eventually wear the citizens down, so they end up revolting and killing you.

Basically, he advises striking a balance; being kind to those who deserve it, and using cruelty wisely and without remorse, destroying your enemies swiftly. His theory does state, however, that if you have to choose one or the other, it’s better to be feared than to be loved, because fear gives you more control. 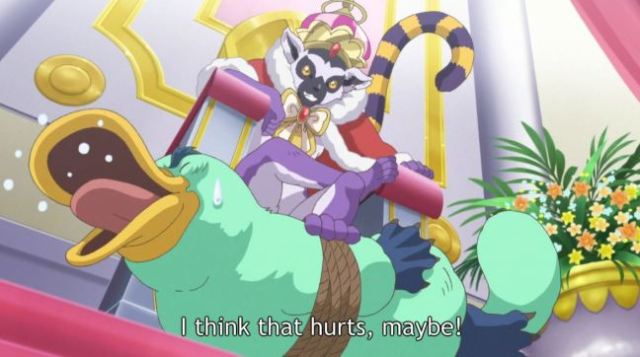 Aria: It’s interesting to see exactly how polar the two bros are on this stuff, and Wao/Kamopapa as well. Basically, it’s hard power (military force, which is what Wao uses) against soft power (persuasion, cultural power and the like, which you can see in the laissez-faire ruling style of Kamopapa) so to have the two together like they do in the end is pretty much the argument for smart power (a combo of the two)…sorry, I went all international studies there, but hopefully you get my drift. Machiavelli’s arguments lie more on the side of hard power, if that’s not obvious.

Astral: Yeah, that’s what I was thinking as well. The kingdom worked because each of them did what they were best at, but, exactly as Machiavelli wrote, the kind and soft Kamopapa got betrayed by his advisor who believed he was too soft. I was hoping for more of a battle between the two ideologies, maybe each learning the value of the other, but instead we just got an ending where everyone is happy. I’m glad we got to see a little of it at least, with Karls and Furanui agreeing to be co-kings, which should benefit Honyala land quite a bit.

… Actually, this reminds me a bit of a quote from Date Masamune, a warlord from the Sengoku Era of Japan. He wrote: “Rectitude carried to excess hardens into stiffness; benevolence indulged beyond measure sinks into weakness.” I think that’s maybe even more fitting for this debate.

Aria: Hmm…that does sound like Ata and Kyoutarou. The whole singalong to Happy Ready????? was quite unexpected though. It’s very in line with what Boueibu does, considering season 2’s finale, but…well, if you ever wanted to say you saw a coup d’etat overthrown by singing, here you go. 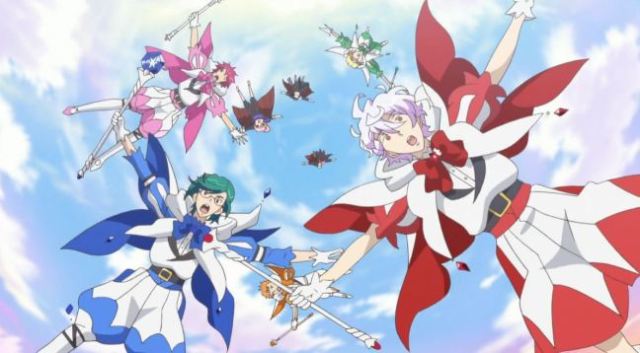 Astral: Honestly, I think that may have been my favorite moment of the series so far, really exceeded my expectations and surprised me in a lovely way. The song was great, adding a totally new and unexpected spin to that great insert song we’ve heard so many times, and talked about so much. I appreciate music, as you probably know, and that… really, really made me, well… HAPPY!

Aria: (The OP is still the best though.)

Astral: Yeah, I wasn’t expecting so much parallelism there, so the relationship ties really threw me for a loop.

Aria: Considering how all the guys are related in this season, I’d have to say this season’s characterisation was a lot better than the other ones, now that we can actually look back on it in retrospect.

Astral: I’m still working on watching the first season, as life has not been nice to me these past months. One thing I can say for sure, though, is that this ending stuck a much better landing for me than the ending of Mahou Shojo Ore. The emotional climax was far more well-presented, and all-in-all it was just a more well-rounded-out ending.

Aria: Yeah, it was. Even if it was Boueibu’s common standard of ridiculousness for endings, you can see a vast difference between the shows because the Boueibu staff clearly have more experience…or maybe that’s just my fondness for Takamatsu shows coming through. Mahou Shoujo Ore is based on a manga, after all.

Astral: Yeah and from what we’ve learned, they didn’t exactly stick to the manga, either. Plus, everyone loves musical climax endings, and Boueibu delivered in style.

Aria: Really? I’m not really into musicals – I dropped Dance with Devils based on that fact – so I wouldn’t say “everyone”…

Astral: Okay, fair enough. Honestly, i’ve got to admit, when you told me we should watch this show for the collab, I wasn’t really expecting to enjoy it very much. It’s definitely gone above and beyond what I had expected, and i’m glad you introduced me to the series!

Aria: Well, considering your standards for shows like Boueibu were based on watching Sanrio Boys prior to it, it’s no surprise you went in with low expectations. Sanrio Boys is fine (maybe more on the “trash” side of things, depending on your viewpoint), but it’s clearly not a good comparison.

Astral: Indeed. You have my apologies for lumping it into the same category. Anyways, should we finish this thing off, once and for all?

Aria: Of course. We can’t just hype this battle up for nothing!

Astral: How should we end this?

Villain Boss: You can’t take me down that easily! You think your puny abilities can stand against the likes of me?? I’ll destroy you, and everything you stand for! HAHAHAHAHA!

INTERSTELLAR AVALANCHE is an attack that functions by crystallizing pure magical power into a rush of energy that threatens to sweep an enemy away. The more they struggle against it, the more fluctuations it creates within the flow, causing it to become ever more violent and dangerous.

Aria: …For the last time!

Astral: A crescendo of caps to end our Collab on!!

Sadly… that’s the end of this collab. It’s been super, super fun, and an absolute honor working with Aria on this project, i’ve really enjoyed it. I enjoyed both shows more than I thought I would when we first threw this idea around, but I feel like it’s turned out pretty well in the end.

A big thanks to everyone who’s followed our collab along so far, as well as to the studios who produced these shows for us to watch, enjoy, and make fun of. Biggest thanks of all goes to, of course, Aria, for putting up with my ADHD brain for a whole season trying to get this collab to run smoothly.

Make sure to check out the last of our special Flashback Posts on Aria’s blog, and check out some of her other material as well. Thank you all for reading, as always, and i’ll see you in the next post.

4 thoughts on “Spellbooks and Horoscopes – Boueibu Happy Kiss! THE END”